Robotics in Australia: The Accelerator to Australia’s Growth

Robotics in Australia: The Accelerator to Australia’s Growth
Is Australia heading in the right direction?

Though humans themselves can make a huge change in this world, robots just make this change a lot more fantastic. There is no denying the fact that these astute robots, structured just like human beings, can work 100 times more expeditiously than them. The emergence of robotics has benefitted humankind in several ways. All the countries keep experimenting in robotics by trial-and-error methods, some accomplish a great success while some keep trying their hardest to make it work. Robotics in Australia has a long history or we can say that Australia and Robotics are inseparable. According to Karen Andrews (Minister for Industry, Science and Technology), Australia is universally identified for its advanced research in robotics that too in a slew of areas.

The expanding robotics technology in Australia is serving the country in multiple ways like enhancing the living standards, reaching out to remote communities, safeguarding the environment, opening up opportunities for more fulfilling jobs, increasing the affordability of healthcare services, encouraging investments, and building a bright future for the next generation. Australian robotics industry affects various areas in a positive way, creating a roadmap for flourishing Australia and help the country solve unique challenges.

Australia’s rapidly developing robotics technology creates a high demand for preparing the next generation for the jobs of the future. With everything being more advanced, the need for human work has been substantially decreasing. We also have the greatest examples to prove this, have a look!

1.       ATMs and self-checkouts have conveniently removed the staff that used to manage such work.

2.       Knocker uppers as well as switchboards are no longer the duties of humans to perform.

3.       In order to enhance productivity and reduce labor time, factories are being fully automated, consequently showing the exit gate to the factory workers. 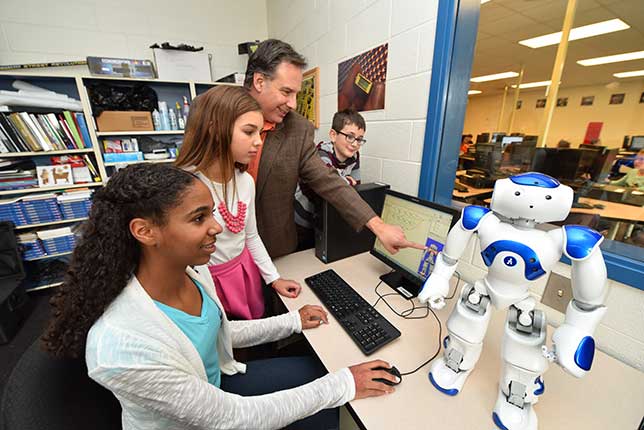 The above-mentioned are just a few examples of the smart world replacing hardworking humans (trust us the list is never-ending). With that being said, do we ever ask ourselves if we are actually preparing the next generation for the fully automated world? According to a report ‘Australia’s future workforce?’ released by the Centre for Economic Development of Australia, it is highly believed that around 40 percent of Australians jobs are most likely to disappear by 2030. With that being said, it is quite obvious that the jobs of today will be replaced by the jobs of the future. In this way, it becomes imperative to prepare today’s generation accordingly. The Australian government has been working to ensure that each and every student in Australia does have his/her own personal media laptop. The purpose behind this is to prepare students for a technically sophisticated world by letting them learn programming and physical computing. Every educational institute of Australia aims to inculcate the understanding of digital competencies in students.

Use of Robotics in Australia’s Non-Customized Building Products Sector

To some extent, robotics has been used by Australia’s generic or non-customer specific building component and products suppliers in order to make their manufacturing operations more convenient. Robotics sorts out a lot of basic activities in these industries like cutting, welding, gluing, product checking and inspection as well as the transfer of products between various work stations. The non-customized building products industries use robots to remove hot ceramic sanitary-ware products from their firing kilns. The production of gates and stockyard fencing has also become easier with the use of robotics. For the purpose of underground ground support, the robots are used to make sets of rock bolts. The use of a five-axis robot has enabled 3000 nuts and caps joints daily that too way more conveniently. The aluminum access scaffolding systems are produced using a robot which makes it reach 4 distinct workstations.

Ø  The Ford Motor Company of South Australia has received 47 overhead gantry type robots in order to make the manufacturing and installation of automobile doors fully automated.

Ø  Australia is well-known for the world’s highest usage of arc welding robots.

Ø  The small niche robotic industry developed by Australia uses remotely controlled equipment in order to remove marine fouling from below as well as within the splash and tidal ranges.

Ø  Robotics is being used by Qantas Airlines to deliver food and cutlery items in airline passengers’ tray.

Ø  The robotic population of Australia which is around 1350 units, is relatively high than most of the countries.

The robotic industry of Australia is known to be the most creative and highly active as compared to other countries. It will be no exaggeration to say that the Australian robotic industry has contributed the most to its ever-growing economy.

The person in debt declares bankruptcy, while his exact financial scenario leaves him and does not use other options to pay off and manage his debts. More...

The Emergence and Advancement of Australian Astronomy

Out of all the entrancing things or views this universe offers us, there is one thing that makes us the most inquisitive. Can you guess what is it? We More...

Why tech is of the essence right now It doesn’t take a pandemic that threatens everyone’s future to realize that technology is inevita More...

It’s been a decade since cryptocurrency has started leaving a mark on people’s mind. With the world becoming fully digitalized, the emerge More...